Putting the 'fun' in fundraising

Get inspired to raise funds for Love Cyprus Dog Rescue. Here's what just some of our supporters have been up to this year.

Charity Dog Show, organised and hosted by Tasha in aid of Love Cyprus Dog Rescue and St Michaels Hospice! Please come and support us. Plus raffles, stalls, cake and much more! See details on Facebook here 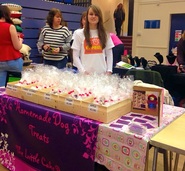 Massive thanks to Tasha for being so amazing and creative! Tasha runs a small business called 'The Little Cake Pixie making fabulously tasty cakes to order. After Tasha adopted her beautiful dog from LCDR she wanted to become more involved and so started making doggy treats to sell to raise money for the not so fortunate Cyprus dogs! With the money she has raised she has sent a lovely box of goodies for the doggies and to top it off some special collars which are desperately needed out here to keep the dogs safe from sandflies etc.
I hope you will join us in congratulating Tash on her fantastic achievement and continued support! You're an angel Tash

​We cycled from Seattle in Washington State to the Golden Gate Bridge in San Francisco California which took us 3 weeks using the Pacific Coast Highway. The mileage was 1184 (which can be seen in the photo taken at the Bridge with 2 very happy and relieved cyclists) so we averaged 56 miles per day over the 21 days. We organised the trip and were completely self supported and so carried all our food, clothes and camping equipment on our bikes.

We raised £1850 which we were really pleased with but probably spent that in butt cream and haribos:)